El Rosario was a good centre for us to make a pit stop; good hotel and restaurant so we could catch up and clean up.

The plan from here is to ride down the main road and catch up time. With 15 days and 1200km to cover to get to La Paz, we want to get further south and then make some more diversions on to the Baja bike-packing route.

We rode out of town beside the dry river lined with cultivated fields – mostly growing various types of vegetables. Once we crossed a 500m wide bridge, the climbing began. Day 10 saw us break our record for the most number of metres climbed – 1207m! Thankfully MEX1 was nowhere near as busy as our previous ride through San Quintin.

The scenery was vast and spectacular – eroding dry slopes with pink soils and sparse vegetation, enormous mesas and buttes. Once we reached about 500m elevation, the road wriggled along a high saddle with steep drop offs on both sides, topping out at around 650m.

Heading east into the Valle de los Cirios protected area, giant Cardon cactus and cirius trees dominated the landscape. Having left late from El Rosario, we had just aimed to reach a small roadside village that was marked on the map, but arriving there just on sunset, the place was derelict. We continued in the hope that one of the other places marked on our map would be not too far away.

Riding into the evening again, the red afterglow of the sunset at our backs, we continued another 12km before we came to the cafe/truck stop that we were hoping for – Cafe Heliken, near a small village called Guayaquil. The owner allowed up to camp beside the cafe and we filled up on quesadillas.

Overnight there were quite a few disturbances – people coming and going, headlights, loud music and voices. I had an extremely poor sleep keeping an ear out for the movements of the visitors. There were no issues though and everything was intact in the morning.

Feeling very tired, with leaden legs and puffy eyes, we set off along the open plain into a brisk headwind. Progress was slow. After about 20km, the scenery just got better and better and we turned slightly away from the breeze.

The plains were studded with mesas and larger mountains in the distance; the areas in between were covered with giant boulders and outcrops. Growing in between the rocks grew giant Cardon cactus and cirios trees. We stopped the film and photograph several times before pushing on to Catavina.

Catavina was meant to be late lunch stop and a resupply point for the next couple of days. However, I have been feeling pretty exhausted and not recovering after each day’s ride. We are not quite making the distances we need to get to La Paz in time. I can feel myself getting run down, so I made the decision to take a day off here, rather than push myself over the edge – then it might take more than a day to recover. In the past I have always factored in days off to enable recovery and to develop my fitness, but with only 24 days to do this expedition, we have been going nonstop.

We felt it was better to use the reasonable services in Catavina and set up for another push towards La Paz. Hopefully this will be enough rest to make a difference. 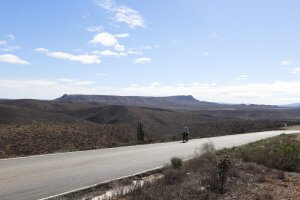