Into the second week, and there is still a fair bit to do to get to Finke, but I believe it is achievable.

A pack of dingoes awoke all of us at 4am, probably a kilometre or so away. The morning chill is still with us.

The river and surrounds is just about all sand now, patches of stones are few and far between. The plan was to cut across some of the bends in the river to make up some distance, but driving and riding cross-country out here is a challenging task. We were often winding through sand dune territory, covered with dry scrub and sticks. It was really heavy going for me because I mostly had no choice but to follow Bob’s tracks which were soft loose sand.

The second cross-country section was over spectacular red sand dunes, through a grove of desert oaks and spinifex, reminiscent of my journey up the Canning Stock Route, but without the heavily corrugated track.

After lunch, Bob and Brian went ahead, all the way to the Central Australian Railway crossing. In this situation I could not deviate too far from the vehicle tracks as I needed to know when they turned away from the river.

I often wanted to head to the river bed because the sand regularly appeared quite often pure and rippled by the wind – a better surface for me to cycle on. I have also started to follow animal tracks along the banks as they can be a reasonable option. However, it is generally better for Bob to stay off the river bed and the lumpy moguls along the side as much as possible to avoid becoming bogged. He prefers to stick to the trees beside the river, which is often loose sand and rough because of animal hoofs.

As a result the afternoon was a long, slow grind for me, following the vehicle tracks. There isn’t any other option though. I lost the tracks towards the end of the day, but eventually connected via the CB radio and made it to the railway crossing in good time. We decided to camp there, my minimum target for the day. 40km done.

Two freight trains passed overnight, one from each direction. There was also mob of brumbies galloping around at night, and Brian saw another dingo.

I set off along the river towards Idracowra Station and really enjoyed pedalling down the middle. The sand is always changing, sometimes reasonably firm but then gives away and becomes heavy work.

Every day I am reminded how much force the water must have when the broad river flows. Enormous skeletal tree trunks, uprooted by the force of the water, lay scattered in the river bed. After 12.5km I met up with the guys who had taken a side track to that point. Bob found what looked like some ancient coral and tiny mollusc shells in the middle of the river.

We continued along the track and passed Idracowra. A little further along the bank we crossed the river and then another 4km cross-country diversion over a confusion of small sand ridges  to Oodratnamma Waterhole. Just before the waterhole we came across the ruins of two cottages that looked as though they had been there for a very long time. Bob thinks 1800s, but we’re not sure.

During another cross-country section we came across a newly graded track, (probably made within the last year) that was not marked on our maps. After a couple of kilometres it crossed the river and then conveniently for us, tracked along the floodplain. Some of the surfaces were reasonable and other parts were incredibly sandy and blanketed with bull dust. It was a real bonus through, and I ended clocking up 51km today. I was absolutely exhausted, arriving at camp after crossing numerous red sand dunes and the river several times, just as the sun set. 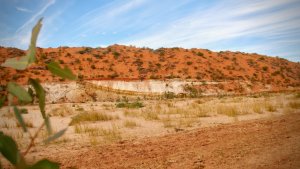 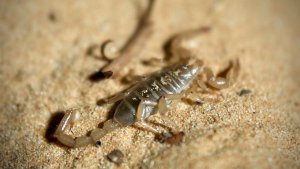 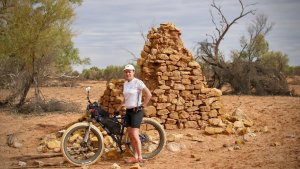 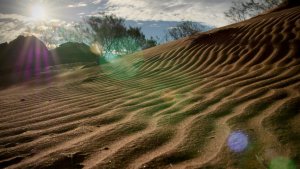