Back in January, in the depth of the severe Ladakhi winter, GHE performed an electrification expedition in the Zanskar region by trekking along the frozen Zanskar River (known as the Chadar Trek). As all roads are impassable during the winter months, the only access to the Zanskar region is an 8-day trek along the river. The inhabitants of Ralakung village had heard about GHE and the great work it had been doing and were desperately in need of assistance to improve their living conditions, including the need to have reliable access the light and solar power. Three of the village leaders trekked for three or four days in -30C temperatures to reach the Zanskar River and then camped out for a further three days waiting for the GHE expedition to come through. They were that desperate to receive a ‘leg up’! Their request was for GHE to come to Ralakung, the most remote village in Zanskar to electrify it and to see their living conditions. In May, when the weather was less severe (though still snow-bound), GHE sent out a survey team to assess the situation. The rest is now history!

The logistics for the expedition were huge; 18 international and Indian participants from 9 countries, the core GHE organisers, led by Jaideep (Paras could only come for three days because he needed to go to Japan for an important conference), and a large team of local experts – electricians, guides, cooks and assistants, filmmakers, animal handlers, and villagers from Ralakung. A part of the agreement was that the villagers assist the team to carry equipment and supplies to and from their village. 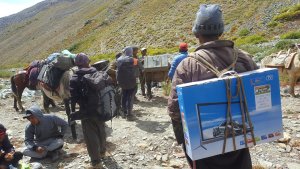 For the participants, it was very exciting to be finally setting off on the trek, though there was probably some trepidation because the task ahead was going to be a serious physical challenge, for many the biggest challenge of their lives. I was really looking forward to an adventure of a different kind, my main concern was how my knee would take trekking down the steeper slopes.

We set off from Phe at around 3628m…the only way was up, up, up, eventually to 4708m at the first campsite. The trekking was, of course, spectacular – vast mountains of all sorts of colours, valleys, fast-flowing streams, some rocky ascents – mostly in sunshine. Thinles, the highly experienced guide (and mountaineer), paced the group so that we kept together. It must have appeared as if we were stepping in slow motion. Ascending for me wasn’t a massive challenge, especially at this pace, because of my fitness and I was already well-acclimatised. For the first time I had decided to use two walking poles in order to protect my knee over the four days of hiking.  It took a while to effectively coordinate legs and poles (how does a spider do it, with double the number of limbs?), as I am a relatively inexperienced trekker, but I believe the choice of using the poles was a good one.

It was great to get to know the diverse group of teammates over the journey. There was time to talk during the walking and downtime. Rather than use the GHE tents, I chose to test my new Mont Australia spacious 1-person Moondance tent. I also felt I still needed some of my own space (nothing against my new friends) because I am still grieving for my Dad. 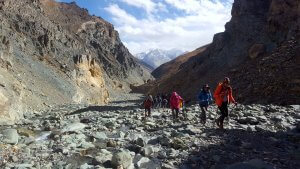 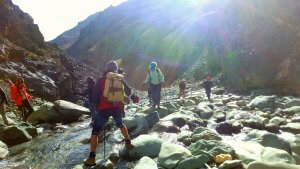 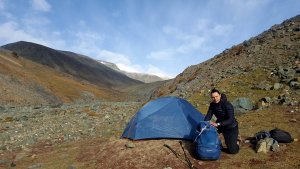 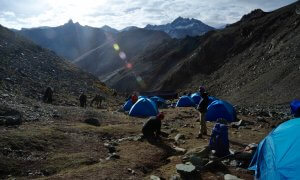 The second day was a big one. The first task was to climb to the 5226m pass, the highest point on the expedition. Once on the saddle of the pass, the weather morphed into a blizzard. The steep slopes were blanketed with snow making the narrow walking track quite treacherous in the gusting winds and driving snow. Everyone inched their way forward, leaning into the mountain, and every corner in the zigzagging path was slippery and steep. The horses really struggled and I have no idea how the locals with solar panels strapped to their backs did it. 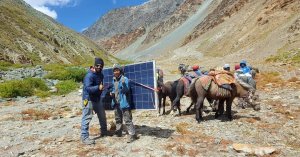 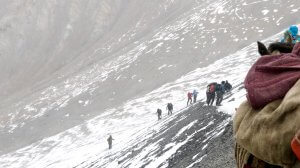 We lunched at 4700m, then continued gradually downwards over a broad undulating plain and into a valley. Ralakung actually consists of two villages, separated by another 4600m pass. From here we had the first glimpse of the smallest, oldest village (about 1100 years), Phema, that consists a four houses, nestled amongst the high mountains. We were heading for the larger village, Namga, that is comprised of seven houses. On the way back, the electricians electrified Phema on their own. 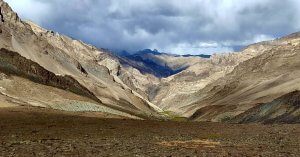 Reaching the top of the Phema – Namga pass, we caught our first glimpse of Namga, a massive 500m steep descent which was a bit too much for my knee, but I soldiered on and just did it anyway. 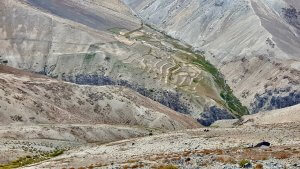 The villagers had been preparing to welcome us for some time. We were each greeted and honoured traditionally with khata, (white scarf), locally produced chapattis, curds, tea and ground roasted barley, their main staple. The women performed some traditional songs.

Our group was accommodated in the seven houses for both of the nights we were there; the first night would be without light, (only torches), the second with light after the electrification. The houses, similar to several others I have stayed in, are simple, well-organised double story buildings, made of mud bricks with stone fences (usually topped with piles of drying dung that they use for fuel during the winter). The roofs were made of layers of branches, straw and dry mud, with hay stacked on top for insulation and to sustain the animals during the winter. Being September, all villagers were preparing for the long isolated winter, cutting and processing hay. 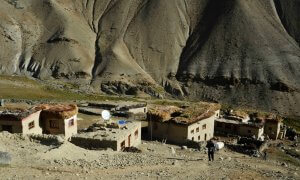 The village and fields are perched on a fertile patch of land that is continually being replenished by natural dung fertilisers, surrounded by the most dramatic natural amphitheatre you could imagine. In the winter the snow capped mountains reflect light, providing more solar energy than in the summer. 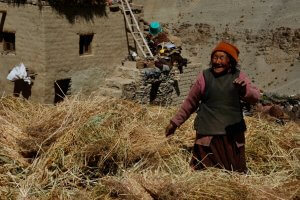 The next day we were briefed by Jaideep, the expedition leader, before we were divided into groups and went to work. Essentially, as the expedition participants are not expert electricians, we were there to support and perform some simple tasks to help the GHE team. Our jobs generally included assembling the light sockets and switches, then liaising with the owners of each house to see where they would like their eight light bulbs to be positioned, attaching the light sockets and securing the wires and solar panels. 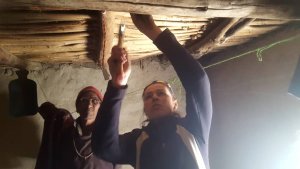 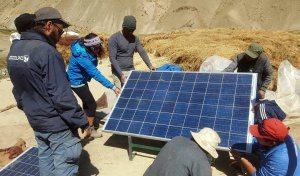 In the afternoon, one of the most important interactions we had was with the local villagers. The whole group sat in a large circle and we were able to ask questions of each other while the lead filmmaker, Stanzin Gurmet, translated. There’s too much to write in any detail here, but it seems the electrification of the village is a great start. There is so much more that the villagers need to make a better life; education, health and communications are the keys. They are not money orientated at all, rather, they are happy within themselves. If the situation develops, they would be extremely happy to host more tourists – we were the first tourists to ever trek to Ralakung – but they would be happy to host just to meet new people. 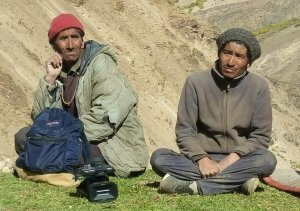 They have a school there, but they cannot keep a teacher for any length of time because of the isolation. Occasionally some of the children are sent away to school, but they cannot afford to send them all and usually the girls miss out. Health is a big issue. Last winter, one of the older women became unwell. They repeatedly called for help on the village satellite phone, but could not raise any assistance for an evacuation. (During election time, the government sends in helicopters to ensure they have an opportunity to vote, but nothing in a medical emergency). In the end, four of the strongest men carried the woman on their backs for four days in extreme conditions and got her to Padum hospital, but unfortunately it was too late and she died. 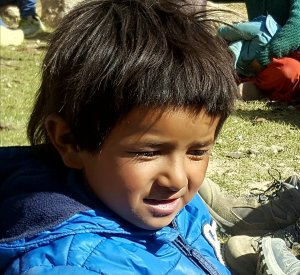 With the village all wired up, there was time before it became dark to wander and entertain ourselves in whatever way we chose – some played soccer, I took part in a women’s meeting. Then the big moment. We gathered in the top house and waited for a few visitors from the other village, Phema, to arrive and join in the festivities. There was a series of prayers and blessings before the oldest woman in the village was given the honour of flicking the switch. There was wild excitement. I stood next to the oldest lady and she hugged me strongly for a long time. Her earlier comment (as she danced on her haystack) was that she was so happy because she would see light in Ralakung before she dies. This made me feel pretty emotional. We then stepped outside in the clear, cold night and the remaining houses were lit up. It was very special. Celebrations lasted well into the night. 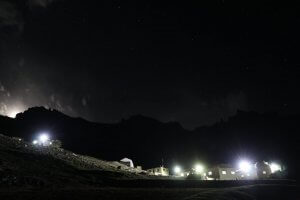 The next day we began the return journey reaching the campsite early, the point at which we had taken our lunch break at the base before the big climb. At 4700m, it was a freezing night, down to about -5C. My water bottle was frozen inside my tent, though I was warm enough. 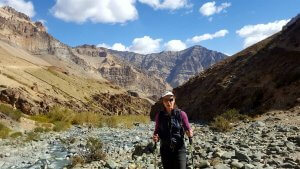 Thankfully the weather for the final long day of trekking, almost 20km, was fine, and ascending to 5226m was not the challenge it would have been had we the same blizzard conditions we’d experienced on the outward journey. With Phe in our sights, most of us made it back on foot, others on horseback.

The women’s association of Phe, a village of 500 people, organised a reception for us, and later on, a celebration. I think it was something I ate at the initial reception that didn’t agree, and I was ill twice that night. Luckily I was just required to sit in a bus for the next two days, driving to Kargil, then on to Leh. The busses really struggled on the stony road I had ridden to get there. On the way up, I cycled at around 10km/hr and on the way back, the busses could travel at around 15km/hr…it was rough!

Now back in Leh, we have concluded the GHE expedition and just about everyone is returning to their various corners of the world tomorrow, most will be straight back to work. I have used the day in Leh to prepare for the second half of my cycle journey, covering the route I have planned to lead for World Expeditions next year. I will have 9 days to ride over some of the world’s highest passes and to the lakes of Tso Moriri and Pangong. Jigmet, the cameraman and a new driver will travel with me. 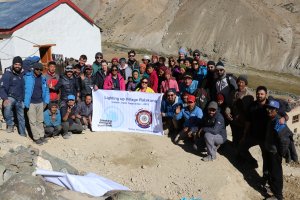 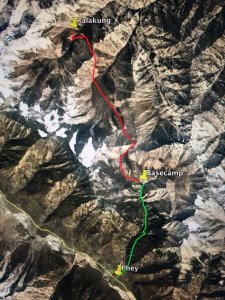 The trekking route from Phe to Ralakung (credit: Cody Shandy)

To see more images, go directly to page 5, 6 and 7 on the images below: