The students at Khalse Secondary School rise at 5.30 every morning for prayers, meditation and yoga. I stayed in the girls’ boarding house which was protected by several dogs that would attack anyone they didn’t know. This meant that every time I wanted to leave my room (even to go to the outside toilet), one of the girls had to escort me past the dogs. As I was getting ready to give my 8am presentation, the dog that the warden said had, at last count, bitten 21 people pushed open my door and sat there, tail wagging. It had accepted me and we were friends for the rest of my time there. Jigmet (camerman) however, got a nip though.

My presentation to 130 students seemed to go down pretty well. The students – girls on one side, boys the other – listened and took notes. When it came to question time, they were very shy, but there were a few contributors. Stanzin, from GHE translated as not all had a competent grasp of English.

In each of the schools that I am visiting (Khaltse, Wanla and Photoksar), GHE has set up an Innovation Centre, providing 8 computers and a special device called “RACHEL” that creates a WiFi hotspot and also contains a library of resources, enabling students to access information and develop computer skills; the next best thing when they don’t have access to the internet. In Wanla and Photoksar we were setting up the RACHEL device and it was fantastic to see the students learning to use the new resource with such enthusiasm.

There wasn’t much hurry to move on because I only had to cycle 20km to the village on Wanla where I was to give another presentation in the evening. Just after Khalse, the route veered away from the Indus River and along the Yapola River, a tributary. The scenery just seemed to get better as I turned off the highway towards Wanla, a village of about 1000 people. There was plenty of time to meet the Principal and other teachers, get settled in my accommodation in the teachers’ quarters and wander up to the Wanla Gonpa (monastery). The village was located at the junction of two river valleys, the stunning colourful mountains, as a backdrop.

The ride to Photoksar loomed as an enormous challenge for the third day of an expedition. Starting from the Wanla school at 3138m elevation, over the next 38km, mostly on a stony rough road to Sirsir La pass at 4826 metres, a 1670m climb. Up until 10 years ago, there was only donkey track connecting Photoksar and other Zanskar villages to the outside world, a track that according to Sonam Dorjay (Counsellor of Lingshet village who was overseeing my talks) was so hairy that donkeys were frightened to traverse. It may only be a dirt road, but there has been an immense effort to build it at all, excavating rock from some of the sheer cliffs to clear a wide enough path through a spectacular narrow gorge, bridges and retaining walls.

I just tried to pace myself, keeping a low gear and avoiding unnecessary exertion. After about 4100metres, the air temperature suddenly dropped as the snowcapped peaks came into view. The air became much thinner and a struggled to suck in enough oxygen as I neared the pass. It’s not the highest pass I’ve ever done, but certainly the longest climb in one hit. The 12km descent to Photoksar was a lot of fun, though I was sure to ride conservatively to keep me from sliding over the edge of the road.

I had seen images of the village online, but it is still much better for real. Wow! This time we stayed at Photoksar school with 31 students. Some were just 4 years old, so young to be at boarding school, but they come from such remote villages so there isn’t much choice if they are to have an education. As in Wanla, I spoke to the students later in the evening. The older kids were really soaking it all up, but it was too much for the younger ones, who were exhausted from a full day.

From Photoksar I retraced my journey, from 4238m elevation at Photoksar, back up to Sirsir La and then descending what must be the longest continuous and most awe-inspiring descent I have ever done. I returned to the highway where we said goodbye to Sonam, and then up to Lamayuru. There was a real sting in the tail, ascending steeply in parts up to the monastic town. The gonpa is the central attraction and the whole place is more geared to tourists. I was meant to speak at the Secondary School here too, but the students happen to be out on an overnight excursion. So instead, we are staying at a homestay owned by the head of the school council. 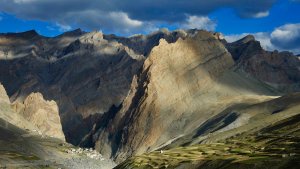