There was a lot to do to prepare in Alice Springs before heading off to Helen Gorge for the start of the expedition.

By 8.30am we were in at the famous Alice Springs School of the Air as I had set it up to give two talks to years 7/8 and 5/6. It was a very different experience from when I dropped in to the Kimberley and then the Carnarvon schools of the air in 2004 because the technology has changed. There were plenty of great questions from the students who live in remote stations, most hundreds of kilometres away. I hope the students will follow this expedition and get involved in the programme in some way.

The other important engagement was to visit some Arrernte elders of the region at the Akulerre Healing Centre. There Brian and I met Amelia Turner, a local elder who was busy preparing food for a visit from Martin Luther King III’s grandson. It was good to touch base and learn a little about her culture. We were wanting to connect to find out more about what Larapinta means to her people, however the region we are visiting is the realm of the Western Arrernte and not her people. She said she really appreciated our visit to let her and her people know what we were about to do.

After a speed shop in Coles, we were off on a 130km drive to the majestic Helen Gorge, 4km away from the start of the Finke (Larapinta) where we camped at the Lodge campsite. The gorge was an incredibly spectacular backdrop with red cliffs rising high above the permanent pools of the Finke River.

In droughts over the millennia, Aboriginal people and animals could always rely on the permanent pools to survive.

One of the biggest challenges that I had already determined was how to negotiate the gorge as the deep pool fills the gorge wall to wall for about 100m. We spent about and hour or more to recce the area around the gorge to work out how I was going to get through with my bike. Scrambling up either side was nigh impossible with the bike and I was thinking I may have to start from a long way back, but then it was impossible to determine how difficult it would be to descend back down to the river.

We drove out to Two Mile camp and then walked the final 750m to where the Ormiston and Davenport creeks meet – the start of the Finke River. As usual, it took a long time to make final preparations – setting up the bike and Brian interviewing me. Not far from where we were parked we found a family camping who had a kayak. They kindly loaned it to us to ferry the bike across the gorge.

I set off at around 1.30pm, making the 4km to the gorge in good time. I balanced the bike across the boat, and although awkward, managed to paddle it to the far shore, drop everything off, then back again to deliver the kayak, and finally swimming back to my bike. It was an incredible experience to kayak and swim the gorge.

Then it was on the bike and into the unknown (for cycling that is). The terrain was really rough – large boulders, stones, sand, grass and reeds. The sand was totally messed up by animals coming to drink from the permanent pools. I had to scramble around another permanent pool, but it didn’t present the same issues as Helen Gorge.

After about 8km the valley widened and the river bed splayed out to fill it. It was difficult to tell which channel was best to cycle over often with trees and grass in the middle.

Bob and Brian had all sorts of trouble firstly try to find a track marked on Bob’s map that wasn’t there. It meant they couldn’t get to the first rendezvous point that we had agreed to meet. Then, when forced to go around and along the river they were bogged several times. Bob really demonstrated his immense skills to free the vehicle. The sun had set and the almost full moon was up before we finally found each other.

There were a few lessons we learned on our first day – one being how difficult it is going to be to deal with navigating the wideness of the river with multiple channels. I unfortunately lost my mobile phone, I’m pretty sure I left it on the far side of Helen Gorge. 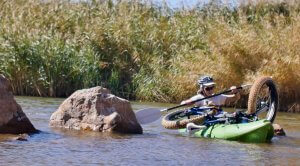