The mornings have been very chilly, perhaps only a few degrees. Ay Boggy Hole the hill adjacent to the campsite blocked the sun just about until I was ready to set off. The first 30km was on the Finke River 4WD track. It cut a couple of corners, but it was still in the realm of the Finke and it will be the only time from now that we will have an easy track to follow (all relative).

We lunched at the beautiful Running Water Yards Waterhole and after Brian did another interview for the film before we set off. Here we turned back on to the river. There were no tracks at all and Bob managed some very skilled driving to get across several gullies and mounds to access the river.

It was particularly intense work for me because, now that we are out of the National Park and back into grazing country, the riverbed is messed up by the hoofs of cattle mainly, especially near to waterholes.

Bob would go ahead and they would wait for me to catch up, but there was plenty going on for them to see. I generally followed near to the vehicle tracks, though I lost them several times when crossing patches on stones, sometimes the size of watermelons.

Towards the end of the day we all spotted three dingoes feeding off a cow that a pack of them must have taken down. Another time Brian and Bob spotted a rare black dingo. The waterholes had other life too, such as pelicans and cormorants.

Day 4 camp site was beside another exceptional waterhole about 6 km before No.6 Yard (as marked on our Hema map), with layers of ochre and gypsum in the hill behind, birds, brumbies in the late evening and dingoes close by. The dingoes were really active that night – Brian saw about six pairs of eyes looking at us with his torch and promptly pulled out his big microphones to try to record their choruses of howls. We packed all of our food away, but they were around our camp during the night.

At 10.30pm I tuned in to six classes in North America via the BGAN to do a live streaming presentation. It was a fantastic to be able to communicate half way around the world and have students from Florida to Ontario ask questions as I sat beside the campfire. 46km done.

The cold snap continues – it is winter I guess, buy it was again close to zero degrees last night. This was a very tough day from start to finish. The gorges and cliffs have gone now and the land has opened out. Still the constantly changing scenery and activity along the river bed is always interesting.

It took me about 3 hours o cover 19km to lunch; a constant grind over pocked sand (from cattle) and loose stony surfaces. By then we were starting to see the occasional flame-red sand dune – such vivid colours that I love in the outback.

Later in the day, there were more sections of virgin sand and clay-covered sand, which are significantly faster for me. I reached the Stuart Highway just after 5.30pm, arriving to a few bewildered looks as I emerged from the river bed, under a barbed wire fence with my special Christini AWD fat bike.

I had lost the team for about 20mins before we connected by the CB radio. They had to divert around the fence and had then driven a kilometre down the river.

Tonight we are camping near to where Greg Yeoman and I camped in 2004 during our Australian expedition. It was here that the seed for the idea for this expedition was sown. 42km done. 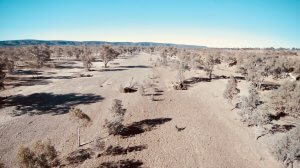 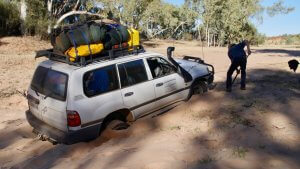