We were interested to see how far we could go on the newly bulldozed track we had followed to the campsite the day before. From the Finke River bank, where we camped, the track was an absolute mess of bulldust and deep, loose sand. For about three or four kilometres, I really struggled over a confusion of white and pink sand dunes. The track veered northwards, though we wanted to head east towards Danny White’s Yards.

With no option but to continue along this track, the route started to bisect larger red sand dunes (more coherent sand for me) and through some beautiful stands of desert oaks. I could hear the breeze rustling through the oak needles, similar to wind through a pine forrest. After 10km, the track joined a better quality station track that connected to Danny White’s Yards (in the centre of a loop in the river.

After 6 km we turned back on to the river. About 3km later we came to Arowie Waterhole – it was different from the pools, probably fed by a spring because the water was clear with a variety of algae and small fish. It appeared to have a healthy ecosystem. We took some water from it (for washing, not drinking) and moved on. We crossed back and forth over the river, electing to ride over some more solid clay pan type soil where possible.

For lunch we are down to white bread, processed cheese and I sliced up some olives to make my sandwiches more interesting! The afternoon session was the horror session for the day, crossing red sand dunes that were covered with dry scrub, acacia and huge spinifex plants. It was a huge driving effort from Bob to get through this, his vehicle scratched and covered with sticks and dust by the time he got through. It was no better for me. I had to follow his tracks, which wasn’t very easy; sand, heat, flies, scratched from bushes and spinifex. I somehow avoided  getting any punctures with sharp sticks a real threat. In the end we didn’t really cut off any significant distance.

The landscape was parched; there were sections of dead trees and on a claypan, two dead horses.

We rejoined the Finke at the point where the Hugh River, another significant river, enters it. At times of rain, this must inject a whole lot more force to the already vast torrents of water.

The final stanza for the day began by Bob becoming bogged trying to cross a sand mogul. Confident of getting out, he waved me on and I cycled the final 4km down the middle of the river, and across a broad sweeping bend to Junction Hole Waterhole.

The site was beautiful; not much water left in the waterhole, but the rock formation was really interesting, with white ochre on the bottom layer and a conglomerate of sandstone with all sorts of river stones embedded into it. In a cove behind the rock, a grassy terrace, perfect for camping. 43km done.

I am starting to feel pretty tired now. My body has taken a beating every day. My legs feel heavy and I don’t feel as strong as I did at the start. Still, I need to hang on and cycle consistently for at least 40km a day for the last four days. We are getting there!

I set off alone, as was usually the case, this time leaving Brian interviewing Bob for the documentary. I made great progress following cattle tracks along the banks. Sometimes there are soft sections, or branches blocking the way, but generally it is one of my best options, while they are there.

The river though, is constantly changing, throwing up new obstacles and wonderful features. Every day is different! After the guys had caught me, about 15km from camp, we came to one of the most magnificent features so far, near Lalgra Yard. Majestic white ochre cliffs, maybe 25m high with a thin layer of red sand/clay and rocks above. This has to be a place of cultural significance. Bob and Brian found flint-like cutting implements fashioned from the hard stones at the top of the cliffs. The ochre is soft and chalky. The Finke/Larapinta has been used as an Aboriginal trade route for tens of thousands of years, and surely this would have been an important place for them.

I really battled over the next ten kilometres in the heat through the sandy river banks to near Davis Well and a lunch break. The good news was from that point, there was a track we could follow which enabled me to catch up some distance and save my legs a little. Tonight we are camping beside Polly Corner, of course beside the river. 44km done.

We have roughly 110km to do in the next 3 days, to get to the town of Finke. It should be very achievable at our current rate, but none of us are getting complacent. 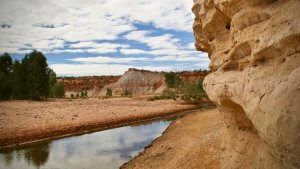 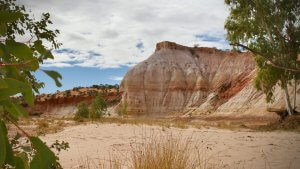