From Polly Corner, the plan was to backtrack for 6km, almost to where we turned on to that track (towards Horseshoe Bend) and then head south along a station track to Cliff Bore on the river. Just as we set off we were met individually by Tanya from Lilla Creek Station, the person whom I had been introduced to through the Alice Springs School of the Air. I had hoped we would have time to drop in to the station, the homestead about 30km off our route.

Tanya however, had been sent to see who was camping on their land (her uncle had spotted our fire the previous evening). When she realised who it was, all was fine. Her daughter (year 4) was very keen to see my bike and asked a few good questions.

Turning south, the track bisected a few red sand dunes before we joined a more major track, with a firmer surface. The way to Cliff Bore looked not to have been used for a very long time and I took the decision to continue on the track, that ran roughly parallel to the river and no more than a few kilometres away. It was further in distance, but significantly faster.

Just after our lunch break, near Clough Bore, a station hand, out checking waters stopped by to see if we were OK. Obviously the word had got around that we were there, thanks to Tanya, so they were just keeping an eye on us to ensure we didn’t get into trouble (much appreciated).

The last few days have been pretty warm, with varying degrees of stormy-looking cloud cover. The flies were out in force too. It was thirsty work passing along some of the tracks, especially as I approached John’s Well on Lilla Creek. The creek area was incredibly soft and blanketed with a thick layer of powdery bulldust. Lille Creek was a substantial waterway, about 150m wide at the crossing. The sand was much coarser than the Finke’s, I guess because it does not have to travel so far.

On the far bank, a huge river gum had fallen across the track. Bob decided to give the station a hand and removed the obstacle, cutting the trunk it into pieces with his chainsaw.

We continued across the vast, open landscape (I love the openness) eventually to Maynards Bore. The diesel powered bore, beside the Finke, had excellent water, with a small hose and tap, so we took it in turns to have much needed wash.

I had made up such good progress that reaching Finke a day ahead of schedule was going to be very achievable. I was sore and tired, but excited about my pending arrival the next day.

I was pretty excited to reach the final day. The chill in the air has long gone and it is warm enough to just wear my cycle kit first thing in the morning. After the obligatory team photo, I set off in the sand, away from Maynards Bore, then turning east.

The first few kilometres were fine, but then the track veered away from the river and into some horribly sandy country; deep sand, bulldust and corrugations with little option but to stay on the tracks. Mixed in was some spectacular breakaway country. I tried not to think just yet about the finish because there is always a sting in the tail. Quite a lot of the route was worse than the riverbed to cycle on!

I had a small break after 13km at Clough’s Bore, where the old telephone line posts still stood. The next 15km took an eternity to reach Beer Street Bore, back beside the river bank. After one final interview by Brian, I set off along the river for the final five kilometres to the Old Ghan crossing, which is what we decided would be a suitable finish point.

I was expecting the usual struggle, but the surface of the riverbed was the best it has been for the whole journey! For most of the way a layer of undisturbed clay (no hoofs or vehicle tracks) covered the sand, allowing me to ride the final kilometres relatively easily.

Bob drew a line in the sand and waved the finishing flag – one of his checked shirts on a stick! It was a great moment and a fitting way to end such a special journey.

Just ahead of us, the annual Finke Race was in progress, with motorbikes virtually flying from one bank to the other. I then had to pedal past all the race-goers for the four kilometres into town. I waved to quite a few bemused looks! The air was absolutely thick with dust. The mayhem was quite surreal after the remote, peaceful journey we had just completed down the mighty Finke River.

We didn’t hang around the town of Finke as there was nowhere to stay and a shower and clean place to stay was in order. We packed the bike and gear into the Land Cruiser and drove for two hours across to Kulgera on the Stuart Highway. Tomorrow we start the long journey driving south.

There may be one more post when I have time to sum things up. 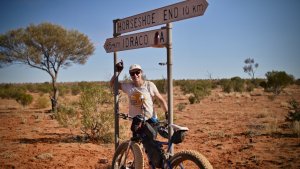 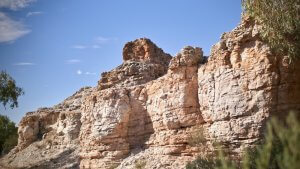 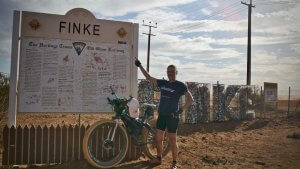 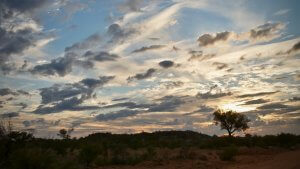