While near to the main highway, the plan was for Bob and Brian to drive up to Stuart’s Well (approximately 80km from Alice Springs) to top up fuel and water and whatever food supplies were available. They would then use remote station tracks and even a fence line track to drive to meet me at Harts Well on the river, about 25km via the river from the Stuart Highway crossing.

I was slightly apprehensive, after what happened on Day 1, as Bob helped me lift the bike over the barbed wire fence and I set off on my own. 750m later there was another barbed wire fence, but this time I lifted the bike over myself. Being a well-stocked station, the whole riverbed was almost continuously broken up by hoofs making progress very tedious and slow. I tried the banks, through the trees and the riverbed. After about 6km, the river splayed out and I thought I was following a tributary. Usually I can determine the direction of the flowing water by the debris gathered at the base of the trees and other obstacles, but there was no evidence at this point. I thought I was going in the right direction and followed the channel for maybe 1500m. Once I passed a small waterhole, I started to see debris hooked on the vegetation and worked out I was travelling in the wrong direction. I followed the creek line in the direction of flow as indicated by the debris and ended up back at the beautiful Snake Waterhole on the Finke. From there I won’t make the same mistake.

We had a communications plan that entailed Brian checking in with me on my satellite phone every hour while we were apart. I would have to stop and fire up my satellite phone to receive Brian’s BGAN message. They were also able to see where I was on the SPOT tracking map on my website, and I would also press ‘check in’ on that device to show exactly where I was.

It was a serious effort to get across Henbury Station country due to the number of cattle and frequent waterholes. It is a beautiful station though. No need for fences because to muster the cattle they would just have to concentrate along the river environs and it’s strings of waterholes.

We met up successfully at Harts Waterhole at around 2.30pm. Then just after we set off together, Bob got bogged. He waved me on saying they would be OK and I continued mixing it up, following animal tracks along the banks, struggling over sand and sometimes going through firmer ground just back from the bank.

After covering 5km, I started to wonder where they were. Then after 9km and still no sign of them, I stopped (4.45pm). About half an hour later, Brian checked in on the CB radio, meaning they were no more than 5km away. Then, as they approached on the middle island I tried to use the CB radio to guide them in and the battery cut out. They drove straight passed and I couldn’t get their attention. It was quite some time before I could hear the engine again. The SPOT tracker gave an accurate location and all was fine. We camped on the island adjacent to where I was waiting. I now carry spare batteries on the bike! 36km done.

Bob estimated it was about -3C in the early hours of the morning – there was an inch of ice covering the large water container and Brian’s tent had frost on it. Today we passed several waterholes; Redbank (where we were aiming to get to last night), Horse Camp, 15 Mile, Little Ampire and Ampire Waterhole.

After Horse Camp we took a short cut overland, though technically still within the Finke floodplain. By the time we arrived to the riverbed, my 4.8 inch wide tyres had become a pincushion for more than a hundred doubles gees (or cat’s heads, centurions, three cornered jacks, devil’s eggs – depending on which state you come from).  Bob and I slowly brushed them off and where the spikes had pierced the tyre, sealant spurted out and immediately closed the hole. Amazingly the tyres were fine.

Next obstacle was a fence. I was easily able to get under it in the river, but Bob had to cut the wire ties, stretch the barbed wire to the ground and put something over the wire to protect his tyres. It was then a case of driving over the fence and replacing the ties.

In the mean time, I continued, mostly on and off the banks. At one stage though, I hit a root in an animal track while also avoiding a low branch and came off, injuring my left forearm. It was just another graze to add to my collection, but a bit of a wake up call.

My favourite waterhole of the day was 15 Mile, with a beautiful ochre cliff as a backdrop and plenty of small birds. My favourite part of today’s ride was the approach to Little Ampire Waterhole. The river was one wide strip on pure sand, virtually undisturbed by cattle, brumbies and donkeys. It was these kind of surfaces that I had hoped to have more of when I planned this journey. I could move along quite nicely, without much of a struggle at all.

Bob and Brian went on ahead after lunch and set up camp at Ampire Waterhole, hung out the washing (that had been sitting in a container being washed as the vehicle bumped along), and Brian set up another interview for the documentary, that I did as soon as I arrived after 37km.

One week done and we are about half way to the community of Finke. 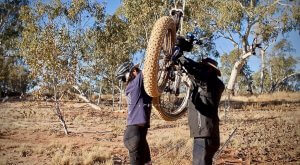 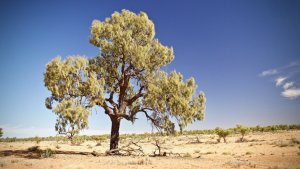 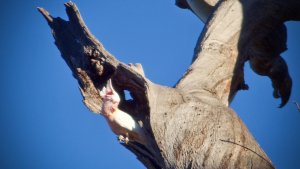