After driving another 140km to Egilsstadir, which is not far from the ferry port at Seydisfjordur, where we arrived, and still no snow riding opportunities, I was seriously considering leaving a week early, thinking we would make better use of our time back in Germany. Mike thought it worth a try to drive inland from Egilsstadir, along the north side of Vatnajokull, Iceland’s largest icecap. Some of the roads are asphalted and maintained to access the hydropower stations, just as we found on the Sprengisandur Route.

About 30km from Egilsstadir, after a beautiful route beside a long lake, and definitely no snow, we ascended via a series of switchbacks onto a high plain, and yes, it was blanketed with snow for as far as we could see! Temperature hovering just above freezing, I could see the melting snow glistening in the sunshine. The charcoal-coloured road meandered across the gently undulating plateau; once a broad lava field with islands of volcanic rubble protruding through the snow, speckling the landscape. After about 25km we reached some snow-covered volcanoes, and as we descended to a bridge across a chasm, the road started to be completely covered with snow and Mike deemed it unsafe in our vehicle to continue. With too little time left to do any significant cycling, we returned back to the valley, and planned to return to do a decent cycle the next day (today).

Down at lake level, it rained steadily overnight, and knowing that the forecast gave a 30 percent chance of rain and snow, it was worrying that the best snow cycling surface may have deteriorated. Back up the slope however, the surface was still firm under foot, even though there was evidence of some rain. We headed back over the plateau through dense cloud towards the volcano and I prepared to ride.

It’s always difficult to judge exactly what the surface will be like to cycle over when on foot, but the snow seemed pretty settled and firm. I moved well on the bike, sometimes sinking into soft patches, but the surface was all cycleable. I kept pretty close to the road as the vehicle could not stray into the snow. On some surfaces the rain and subsequent refreezing caused a crust. When my wheels broke through, the crust acted as a brake.

Not including a couple of photo stops, I averaged around 9km an hour, which is the best I’ve done on virgin snow. The bike performed very well. It will be even better once it is able to accept the wider 5.05” tyres. The AWD on this surface is a real benefit and I can feel it pulling me out of the rough patches where I have to put on extra power.

Being just above freezing, the temperatures aren’t anything like they will be in Antarctica, but it is still a good test of the bike and my ability to ride in snow conditions. I’m really benefitting from the fitness gained during my Baja ride.

Camping down at the lakeside once more, we”ve been treated to a magnificent display of the Aurora Borealis, or Northern Lights. It is the best I’ve ever seen and the first time Mike and Tristan have seen it. They spent more than an hour capturing some awesome images. Beams of light, the result of collisions between gaseous particles in the Earth’s atmosphere with charged particles released from the sun’s atmosphere. The different colours are due to the different gases present in the atmosphere. 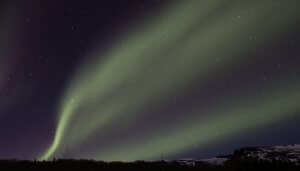