One of the main reasons for diverting to Hunder in the Nubra Valley was to see the sand dunes, which would seem so out of place here. Located just east of the town, the dunes cover a relatively small area (compared to other places I have seen sand dunes, such as the Australian deserts and the Sahara). The grey-coloured dunes look to be formed from river silt, transported by the wind and built up over time. They are Sahara-like C-shaped ergs, some (I’d guess) are 10-12m high. 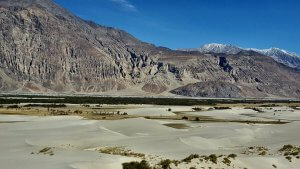 The other draw card for me were the Bactrian camels, I think a relic from the days of the ancient Silk Route. They are certainly built to haul loads over very long distances, over high passes in extreme conditions; their coats are very thick and fluffy to protect them from the cold, and their two humps are like a double sized energy store to sustain them on their journey. The animals seemed more docile than my experiences of dromedaries in Australia and Africa, but that could also have been because the Hunder camels have been trained to be around people. 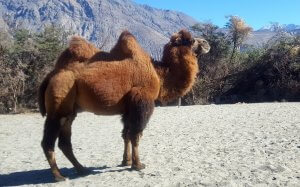 After spending an hour or so walking through the dunes and filming the scenes, I set off for Diskit, the administrative capital of the region and on to Khalsar, (36km) at the base of the big climb. From there, it was a 23km climb in one go to reach Khardung (approximately 3200m – 4000m) where I was to stop for the night.

The gradient was never particularly steep, (no more than 5%), but the climb was long and relentless. For the first 10km, the road zigzagged parallel to the Shyok valley below, then wound its way inland towards Khardung village, the cold air settling in after about 3600m. 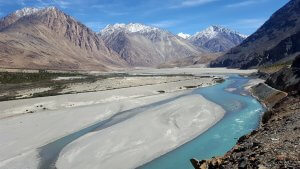 But this was not even half of the ascent. From Khardung, the climb continued for another 32km, to the famous Khardung La, one of the highest motorable all-weather roads in the world at 5360m. Therefore, from Khalsar to the top of the pass involved 55km of continual climbing, gaining 2160m in altitude.

Knowing the day was going to require a huge effort, I set off from Khardung in a determined mood, and felt I was making good, steady progress. Just before North Pullu (military village), the half way mark, the morning suddenly turned very chilly, as I ascended through the snow line, clouds bubbled over and a piercing, cold wind funnelled down the valley, straight from the snow covered Khardung La. The road continued to ascend at around a 5% gradient, but conditions were becoming more challenging with the weather and the lack of oxygen. The looming pass was in view from North Pullu and onwards.

The good paved road ended with about 300m-400m still to ascend. Just when I thought I had the pass under control, it became a whole lot tougher – there is always a sting in the tail! The unpaved road was a bumpy, rocky, and as I neared the pass, a muddy mess. I concentrated hard to thread my way through the stony patches. The worst of it at this point was the number of cars coming down from the pass, many of them being Indian tourists who unlike the local Ladakhis, had no idea how to drive in such road conditions. I found myself not only dodging the stones and mud, but also the cars and motorbikes of some inexperienced and often rather stupid drivers. One speeding motorcyclist clipped my handlebars trying to squeeze through a gap that wasn’t there at speed. I managed to hold strong, but the usually quiet driver Dorjay saw it all happen and let the motorbike rider have it – totally out of character. The final couple of kilometres were very slow, but I could see the pass up ahead and worked my way forwards. I could hardly speak on arrival at the pass as the back of my throat was frozen from trying to suck in enough oxygen. Still I was there, amongst hoards of Indian tourists jockeying for position to have a selfie taken in front of the sign. 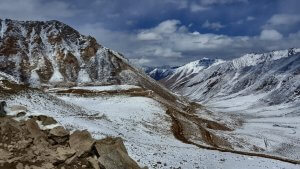 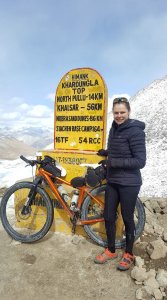 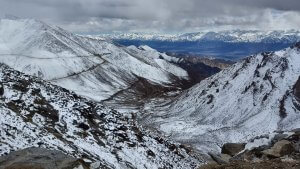 From there, all there was left to do was a 41km descent into Leh. The first 10km wasn’t very pleasant because the unpaved road was muddy, rough and there were a fair few cars and trucks. My hands became so cold, even with long gloves on because my fingers were pulling hard on the brake levers all the way. I had to stop at the first opportunity at South Pullu (another military barracks) for a cup of Maggi noodles to thaw out. After that, below 4600m, the temperature gradually warmed and the road was good quality tarmac. The final 25km didn’t take long and was a lot of fun!

I decided to return to Leh a day earlier than planned in order to capture more of the sights in and around the town. I cycled a leisurely 24km to visit Shey Palace and Thiksay Monastery, then returned to Leh to wrap everything up. 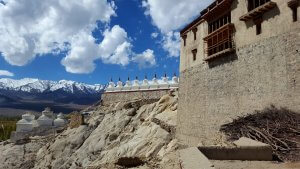 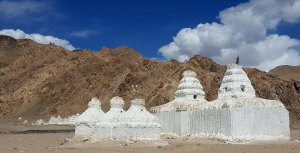 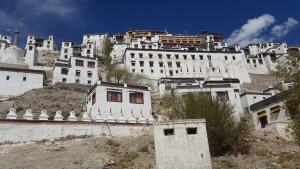 Shey Palace and Monastery; once the summer capital of the Ladakh region

Jigmet, the cameraman has been travelling with me for 4 weeks – the two cycling journeys and the GHE expedition. He has done a great job, always smiling, happy and he worked very hard, taking video and still images. Dorjay, the driver for the second cycle tour also did a great job. He doesn’t speak much English, but that didn’t matter. Jigmet was able to translate.

This evening I have boxed my bike and have everything packed and ready to fly out of Leh in the morning. It has been a great expedition with a few challenges and it will take some time to absorb it all.