At Karu, Dorjay (driver) and Jigmet asked around to find out the condition of Chang La pass. Like nearby Taglang La that was still
closed, Chang La, being a few metres higher, had been closed until the day we arrived in Karu. The advice, adding to my immense frustration was that I would be unlikely to get permission to pass the check point on a bike and would have to put the bike back on the roof of the vehicle for the climb. These people have no idea what it is to ride a bike, and that it would be, if anything, safer than driving a car or motorbike, given the low speed and care any cyclist would take to ride such a difficult pass.

The drive up Chang La was still spectacular. After about 4400m we entered above the snow line and left the green valley behind on the way to the 5364m pass. As it turned out, the whole route, with a 2000m altitude gain, would have been rideable. I convinced Dorjay to stop about a kilometre before the top so I could start riding, cross the pass and continue from there. There was slushy snow on the road, mud and stones, but I simply took it slowly and carefully, riding to the conditions as I always do. It wasn’t long before I left the snow behind on a very long descent, following a narrow gorge which then opened out to a vast open mountainous landscape, no vegetation in sight. 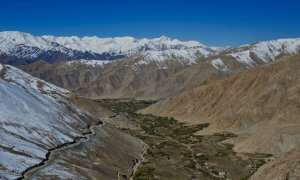 By the time I dropped to Durbuk, a military town, and then on to Tangtse, I had covered 30km and descended to 3900m. From there it was a slow ascent up a beautiful wide valley, gaining another 400m before freewheeling down to the stunning Lake Pangong (4277m). It was a beautiful, sunny day which brought out the deepest blue colours in the salt water lake that contrasted with the bare though colourful mountains on the far shore. 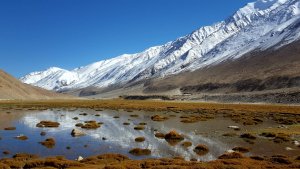 Of course, we could not help but stop immediately to capture the afternoon light, but as the mountains on the south side of the lake came into shadow, I had to push on a further 8km including another climb, to the village of Spangmik where Dorjay knew of a good Homestay. 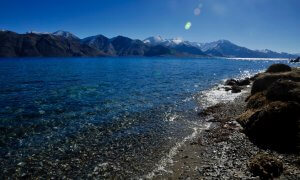 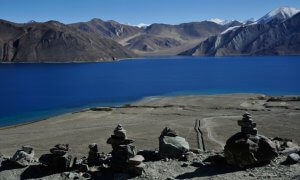 Rather than back track 50km to Durbuk, we drove that bit and I resumed my ride from there to the village of Shyok and then down the vast, awe-inspiring Shyok valley to the Nubra region.

The word Shyok means ‘death’ belying the beauty of the glacial-fed, aquamarine coloured river. The origin of the name probably dates back to when the Silk Route was active and travellers would journey from the Karakoram Pass along it, or the Nubra River. Apart from late summer and autumn, the river would represent a huge challenge; the winters are extreme and then in spring and up to mid-summer, the river is in flood. The road that I followed is usually closed then. I enjoyed riding along new stretches of tarmac, but every so often, sections had been destroyed by landslides and wash-aways. These were very rough and the BRO (Border Road Authority) seems to be always on the job repairing the road. 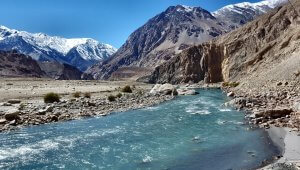 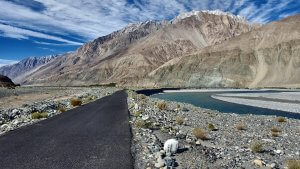 I made it to Khalsar and on to Hunder in Nubra where we stayed. My permit wasn’t even checked for Nubra, so I could relax and enjoy.

I am back in Leh now, but you will have to wait for the final blog tomorrow – Nubra and the Khardung La pass.