Due to the poor quality and rarity of internet connections, it has been impossible to update this site during the expedition, so the following series of blogs have been added post-expedition.

I had messages from my mother and sisters in the morning, keeping me updated with what is happening at home, especially with regard to my father’s funeral arrangements on the 11th, which made me feel pretty low as I was setting off.

The first section of the day was very easy, mostly downhill, dropping from 3290m to 2739m, tracking through a deep valley for 36km from Mulbekh to Kargil. There I had arranged to meet Tenzin Sonam, who until a couple of weeks ago when he lost the election, was the counsellor for the Zanskar Region. I first met Tenzin in Leh in 2016, and as he also has his own company,  Adventure Treks, he has been helping me with plans for my Ladakh expeditions. We met at his government office in Kargil, Ladakh’s second biggest town, and spent an hour or so catching up and discussing possible future plans.

From there it was very pleasant ride up the green and productive Suru Valley. I cycled through a string of villages with many people greeting me as they walked along the roadside. The Suru Valley is home to the Purik people who are Muslim and speak a different language, derived from Old Tibetan (dating back to when the Tibetan Empire controlled the region from the 7th – 9th Centuries).

After a late lunch in Sankoo village, I had made good time and decided to take a 5km diversion to

Khartse Khor to see a 10 metre high carving of an ancient Maitreya Buddha which dates back to the time of the Tibetan Empire. It was well worth the bumpy diversion, but then back onto the main road and another 15km just past Purtikchey village to the brand new Suru Valley Resort, built by a friend of Hussain’s (driver). From there we had the first view of the Nun Kun mountain range (7130m).

Earlier in the day I met two Australian/Canadian cyclists, Angela and Justin and suggested that they stay at the same place. They arrived about an hour after me and we had dinner together. 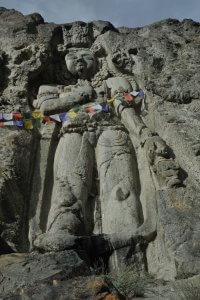 About 10km on from Purtikchey was Hussain’s village, and he insisted I stop to have tea with his wife and meet his family. Then it was back to work. Three kilometres further on the tarmac ended and the fun began on the bumpy, stony road as I gradually ascended up the valley. The mountains were a beautiful display of autumnal colours – reds and yellows. There were patches of water on the road, sometimes long sections of mud and several rickety bridges to deal with.

The lunch stop was at a little roadside cafe in Parkuchik with the well-known Nun Kun glacier as a backdrop. This was the last village for 35km until Rangdum. It was a tough afternoon as the road ascended more steeply over a very rough surface with some larger water crossings to ford. Soon after setting off, the light drizzle turned into consistent rain and once my feet got wet crossing a deep stream, the cold gradually seeped to my bones.

Still the scenery was amazing. After 17km I reached 3900m, passed a stupa signifying that I was entering the Rangdum region. From there the landscape levelled of and I remained between 3900m and 4000m, crossing high plains and a few small lakes. Hussain at lunch thought I would struggle to make it to Rangdum, but I did so, although cold and wet, at just after 5pm. Angela and Justin arrived in the dark at 7.30pm after quite an ordeal. They were very pleased to see some familiar faces. 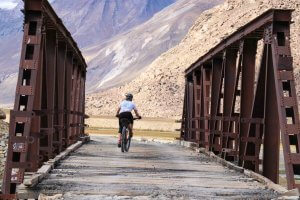 Thankfully the weather had cleared by the morning and I could properly see the amphitheatre of high mountains surrounding the broad plain, altitude just over 4000m.

The first target was Rangdum monastery, about 10km further on. We didn’t stop, except to take photos, but this was a monastery that GHE electrified in the last couple of years. Ten kilometres further on I reached the start of the climb to Pensi La pass, the biggest challenge of the day. One real highlight was the number of marmots scrambling around in the rocky sections – they were very good at diving into their rocky safe houses every time I pulled out my camera. Eventually Jigmet got some good footage of the cute fury creatures.

Pensi La topped out at 4505m, 100m higher than my map indicated. There were a couple of beautiful high altitude lakes just before the pass. But then, a few kilometres below Pensi La was the most incredible glacier I have seen, Durung Drung Glacier; a stunning river of ice flowing into the stream many hundred metres below. Both Durung Drung and Nun Kun glaciers have been marching back at an alarming rate over the last ten years, a phenomenon attributed to climate change.

After lunch on a magnificent high plain (4000m) Hussain again thought I wouldn’t make Phe, the planned destination that afternoon as he knew the road and how rough it is…constant large stones, wash aways, steep descents. I essentially gunned it and managed the last 50km to reach Phe at around 6pm, still daylight.

It is incredible to think that a road so rough is the only access road into the Zanskar Valley. Obviously closed off completely in the winter, the only way out is an eight day trek along the frozen Zanskar River. I noted on the way that channels were being dug to lay a communications cable. The internet is only available in two places in the main town Padum, and then they are notoriously unreliable. Still it will be the only way I can send this blog. Will do my best with the photos.

In two days time I will meet up with the GHE expedition in Phe, but arriving two days early will give me time to explore the Zanskar Valley a little. 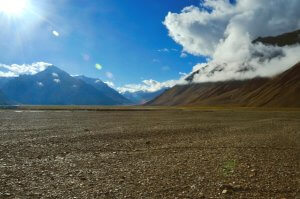