Having reached Phe in good time, I am now spending the 11th and 12th exploring the Zanskar Valley a little.

The region is so cut off from the world, with one very rugged road in to the region, and that was only completed in 1974 and inaugurated in 1978.

I visited two monasteries today, the first, Tungri is a small, all woman monastery, 14km from Phe. Situated high above the plain (3700m), the 12 nuns and 20 student nuns certainly have great views from their ‘office windows’.

Jigmet and I met an 85 year old nun who was a real character. She wore dark sunglasses to shield her light sensitive eyes, which I suspect is glaucoma, her teeth were mostly rotted to her gums, her face deeply creased and her shoulders humped over, but she had an incredible spirit. After giving us tea and biscuits, she was very happy for us to take photos. It was great to have Jigmet able to speak her language. She then took us to see her room, giving the pink prayer wheel a spin on the way (the prayer wheel I’ve seen are usually red or blue). She sat beside the window and read from her prayer book. It was a very intimate experience that, from  my experience you wouldn’t get from a larger monastery. 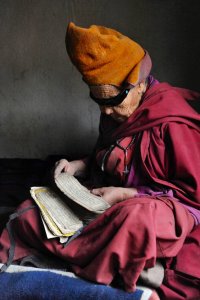 I cycled on to Karsha monastery, the biggest and most powerful in the region. It is set spectacularly in the side of a mountain, the whitewashed buildings staggered down the slope, built into the cliffs. It was quite a climb, very steep nearing the monastery for tired legs. But the effort was worth it, this monastery sitting at almost 3800m. The main prayer room was packed with all sorts of ceremonial and Buddhist effects, walls of prayer books, banners, sculptures, candles and lamps – something significant everywhere I looked. 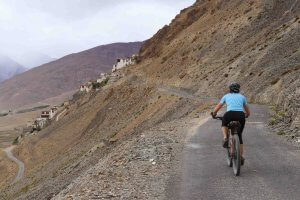 From there it was a steep descent to cross the Zanskar River and 13km on to Padum, the capital of the region and the only place to have an internet cafe (that works at a very slow drip, if at all).

The plan for Day 10 (after I try to send this blog), is to cycle back toPhe on the other side of the river, visiting two more monasteries on the way. We aim to meet the GHE teamat around 5pm, then on the 13th we’ll be installing two more innovation centres there and to Skyagrm village a few kilometres away, where I will also give presentations. From the 14th – 18th we’ll be hiking and electrifying Ralakung village and back to Leh late on the 19th. 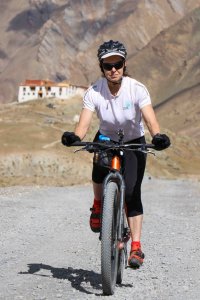