The Nordlandair flight from Akureyri, Iceland’s northerly capital, just below the Arctic Circle, to Constable Point in Northeast Greenland, about 71 degrees N, was spectacular. The Greenland coast was fringed by kilometres of fragmenting sea ice, gradually dispersing into the North Atlantic.

I flew to Constable Point in between Jameson Land and Liverpool Land in Northeast Greenland to make what we understand to be the first bicycle expedition through this region. The main purpose of the journey was to prepare for my Breaking the Cycle South Pole expedition, planned for the end of the year. 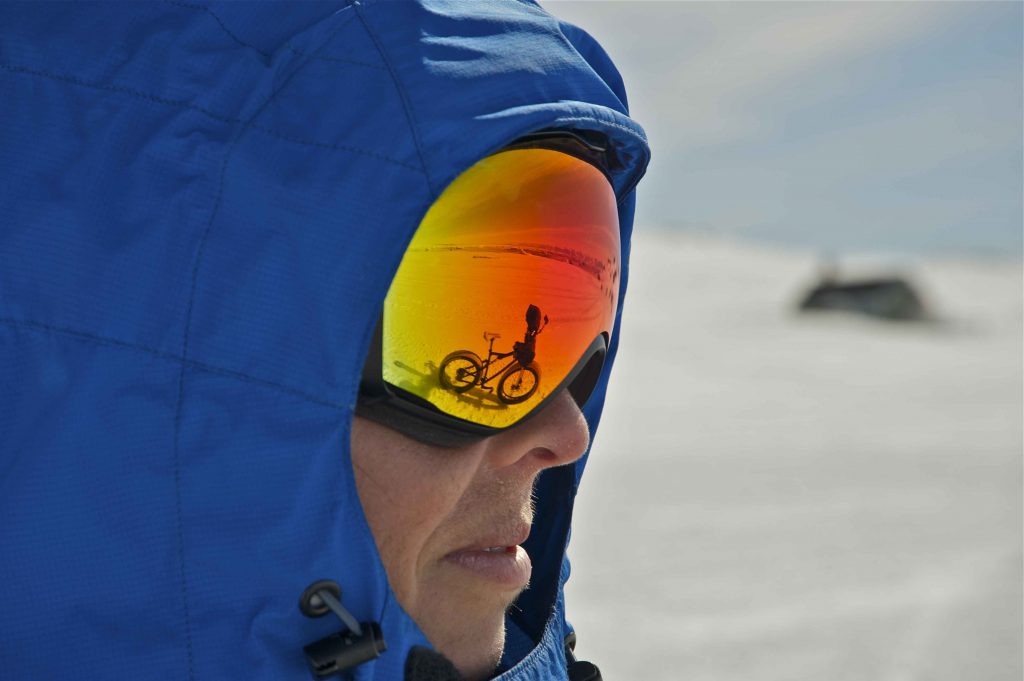 Travelling with me was Swiss filmmaker and teammate, Claudio von Planta, who came to capture the expedition for a stand alone documentary, an episode for the Breaking the Cycle South Pole series and to produce short promotional videos to garner support for the project as a whole. This trip was as much a test for Claudio to film in this extreme environment and try new equipment (using five different cameras) as it was for me to cycle. Logistical support was provided by Paul Walker and his Tangent Expeditions team. We learned so much from our guides, Philip Poole, Darren Harris and Peter Cheung who collectively represented many decades of experience in cold climate expeditions. They accompanied us on snowmobiles for the various stages of the journey.

I was expecting to face temperatures of between -5C and -20C, however Spring arrived early and conditions were unseasonably warm. Instead I had to wait for eight days before I could start the expedition due to forecast blizzard conditions, typical when temperatures are around 0C (give or take). As a result, I did not have an opportunity to make the extended physical test I had hoped for and conditions were generally softer than I will expect to find in Antarctica, and as the melt began, very slushy much of the time.

The seven days I spent out on the modified route were very testing and I believe have provided valuable experience for Antarctica. In that time I was exposed to a range of conditions, setting off into the teeth of a howling Arctic gale. The blizzard brought fresh snow that inland was unrideable, even for my all-wheel drive bike for much of the third day and I pushed most of the 24km up Klitdal and into Jameson Land.

Into the fourth day and conditions improved dramatically – the sun shone, the wind died down and I was treated to sweeping vistas as I pedalled for 50km, the length of spectacular Hurry Fjord which separates the volcanic peaks of Liverpool Land from the sedimentary geology of Jameson Land. In the distance, the high mountains on the south side of Scoresby Sund, the world’s largest fjord formed a stunning backdrop. I really found my rhythm riding down Hurry Fjord and after the trials of the first three days, I started to feel fitter and stronger.

I then turned away from Hurry Fjord, off the sea ice and over some hilly terrain towards Ittoqqortoormitt, Greenland’s most northerly habitable town. It was suggested that I would not be able to cycle most of this because of the steep climbs and soft snow, but the snowmobile track was compacted just enough for my tyres to grip the surface, and although heavy going, I climbed like a mountain goat and pedalled the whole way. Dropping back down to sea level once more, the snow surfaces became extremely slushy, and as the path tracked along the lower slopes of the hills, the angle and soft deep snow meant I was constantly fighting to stay upright and to stop sliding sideways down the slope. Without my AWD bike, this surface would have been impossible to ride.

After spending a day around Ittoqqortoormitt, I headed for the final destination, Kap Tobin, the most southerly point of Liverpool Land. It was just a short 10km ride over the sea ice and back on land to the settlement. Pedalling all the way to the most southerly isthmus was like cycling to the end of the world…the end of my journey anyway.

Kap Tobin was one of the most spectacular places I have ever been to. Around the cape, the turbulent ocean currents were constantly shifting the icebergs and ice debris; swirling eddies causing ice blocks to collide or scrape past one another. Occasionally a chunk would sheer off and flip over to reveal its aquamarine underbelly. Although the seascape was constantly in motion, the atmosphere was tranquil and the icy waters perfectly clear.

Apart from a few minor issues, the brand new Christini all-wheel drive polar bike (mark II) that I had collected the week before in the USA held up beautifully. It really came into its own on rough surfaces such as sastruggi where the front wheel drive grips and helps me climb over the lumps and bumps. The AWD system makes it possible to ride on more difficult surfaces than a regular fatbike.

I was impressed with most of my component selection, in particular, the wheels. The Vee Tire Company’s Snowshoe XL tyres are made of a new silica compound that sheds snow, the white colour reflects heat (any melting of the snow would result in it sticking to the tyres, reducing the grip and increasing the weight). The combination of the tubeless tyres and HED carbon BFD rims made for very light, strong wheels, an advantage in the soft conditions. The 45NRTH Wolfgar boots (the best extreme cold cycling boot, good for -31C) were a success. The cleats often iced up in the warmer than expected conditions, but I think this will be less of an issue in the drier, colder Antarctic conditions. Being attached to the pedals meant that I could focus on the upstroke and have a more even pedalling action rather than bouncing deeper into the snow when I only push down. Revelate Design’s Expedition Pogies (handlebar mitts) and Mountain Feeder bags were invaluable.

This Greenland training expedition has reconnected me with the reality of just how tough this Antarctic bicycle crossing will be. It had been three years since my first training run in Spitsbergen, and as time goes by, I tend to remember the pleasures rather than the toughness and difficulties of the challenge. I am pleased with how my body responded to the shock of the extreme workload and I come away from the expedition with confidence that I am still physically capable to pull the Antarctic challenge off.

This teaser video gives a taste of the story to come:

There are a few issues I need to improve on and systems to fine tune.

Improved moisture control – Cycling in these soft snow conditions is incredibly hard work, and despite it being extremely cold, I am finding it difficult to prevent myself from perspiring. When I stop, any moisture freezes and I can get very cold. Skiers tend to manage this problem a little easier by simply reducing the intensity of their effort, but on a bike, it is generally all-or-nothing in these conditions. There is so much resistance that I can’t go any slower without stopping all together. The solutions are in changing the combinations of clothing layers, using vapour barrier socks to stop my other socks and boots from becoming soaked, altering some clothing designs and trialling a few more different materials.

Diet – the need to get my body used to consuming the kind of diet that I will need in Antarctica before I start (high fat and protein, regular carbohydrates and enough calories in total – around 6000kcal).

Here’s the route of the expedition (click to enlarge):

My training while in Melbourne needs to include more time on the bike; long, steady resistance and hills, some sand work and trips to Mt Buller/Mt Stirling in the winter for some more work in the snow (even though the conditions will be different to Antarctica, it is still good cold weather practice). I need to continue my work in the gym focusing on core strength and interval training and, closer to the time, I can introduce sessions in altitude and cold chambers.

I have two trips planned for altitude training in the Indian Himalaya, in June I am leading a journey along the Manali Road for World Expeditions and if I can find the funding for Antarctica, I will return to do a more intensive journey in September.