A journey back in time along what's possibly the world's oldest river, carving through the heart of the Australian outback

A totally original sand cycling expedition and a journey back in time through the heart of the Australian outback.

The ephemeral Finke River begins in the West MacDonnell Ranges and carves a convoluted path through spectacular gorges before meandering across the desert and disappearing into the sands of the Simpson, about 700km from it’s source.

The Finke River, or Larapinta to the local Arrernte people, is the world’s oldest river (or thereabouts); parts of the course near the source in the West MacDonnell Ranges, are older than the range itself (approximately 320 million years old). It was there when the ranges were pushed up, before the dinosaurs, when the Earth’s land masses were united to form the Pangea super-continent.

The sandy river bed has been an important trade route for the Arrernte in eons past, but no one has ever cycled its course (during the Dry season). Using one of my all-wheel drive fatbikes (prototype developed for Antarctica), the expedition will be part bike-packing and part supported to ensure safety and to capture the highest quality content. We will carry a BGAN Hughes 9211 so we can communicate effectively during the two week journey.

There will be opportunities to relate to students around the world. Robert, better known as Bob has always had a burning desire for travel, with a particular interest in experiencing the lesser-travelled paths of the world. Though home has always been NSW, Australia, there aren’t many places both here and abroad he hasn’t yet explored – from the deserts of outback Australia to Lapland in northern Finland, Cape York to The Great Wall of China. This list is forever growing, and these experiences keep making his life richer and more fulfilled. With particular reference to the deserts of outback Australia, 4×4 driving and camping are a profound hobby.

Accompanied by his family and Australian Geographic, Bob has travelled on the Lasseter’s Reef expedition following the story of Harold Lasseter’s gold reef, Gunbarrel Highway Expedition following the roads surveyed and constructed by the Gunbarrel Road Construction Party led by Len Beadell, and also the Captain Starlight Expedition, following the story of the infamous stockman, drover and cattle thief named Henry Arthur Readford. These are only a number of outback trips Bob has extensively travelled, with the Canning Stock Route, Simpson’s Desert, conquering “Big Red”, numerous 4wd trips with friends also adding to his life’s travel record.

Though the outback trips are not as frequent on the calendar as they used to be, whenever the opportunity arises or is “too good to pass up” low and behold the bags will be packed and he’ll be off on his next adventure. For the near future, Greece & China and on home soil the Finke Expedition are on the cards. As to where he’ll be and what he’ll be experiencing next year? Only time will tell! An accomplished Content Producer & Director with more than 10 years experience in every angle of media production from creative development, pre and post production through distribution. Brian regularly produces and directs documentaries with the University of Melbourne showcasing emerging research. Last year he received the Silver Effie & Tangram awards for his commercial work with IBM, and his award-winning short film “Still” was recently screened at the Miami Film Festival, SOMA, the Berlin International and NY Film Week. 9th and 10th June Total Distance - 524km Day 12 From Polly Corner, the plan was to backtrack for 6km, almost to where we turned on to that track (towards Horseshoe Bend) and then head south along a station track to Cliff Bore on the river. Just as we set off we were met individually by Tanya from ...

7th and 8th June Total Distance - 429km Day 10 We were interested to see how far we could go on the newly bulldozed track we had followed to the campsite the day before. From the Finke River bank, where we camped, the track was an absolute mess of bulldust and deep, loose sand. For about three or ...

5th and 6th June Total Distance - 342km Day 8 Into the second week, and there is still a fair bit to do to get to Finke, but I believe it is achievable.  A pack of dingoes awoke all of us at 4am, probably a kilometre or so away. The morning chill is still with us.  The river and surrounds is ...

3rd and 4th June Total Distance - 251km Day 6 While near to the main highway, the plan was for Bob and Brian to drive up to Stuart’s Well (approximately 80km from Alice Springs) to top up fuel and water and whatever food supplies were available. They would then use remote station tracks and even ...

1st and 2nd June Tota Distance - 178km Day 4 The mornings have been very chilly, perhaps only a few degrees. Ay Boggy Hole the hill adjacent to the campsite blocked the sun just about until I was ready to set off. The first 30km was on the Finke River 4WD track. It cut a couple of corners, ... 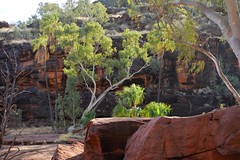 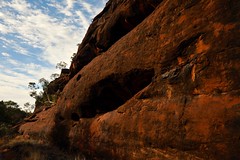 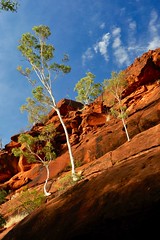 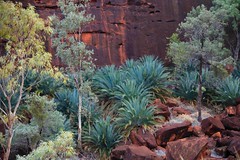 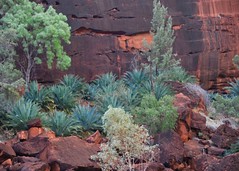 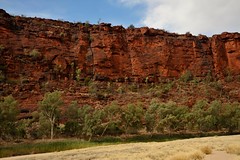 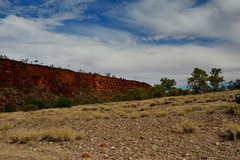 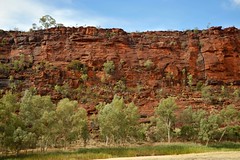 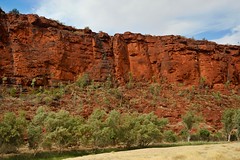 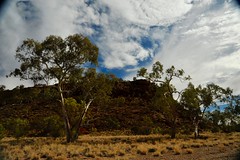 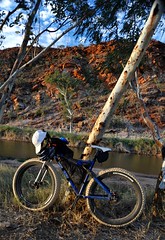 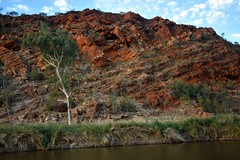 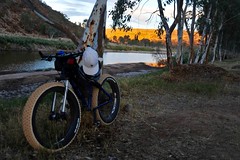 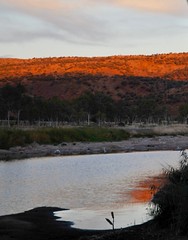 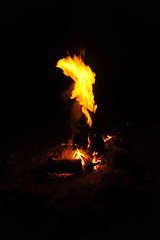 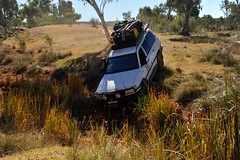 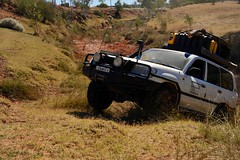 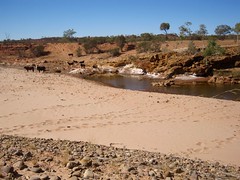 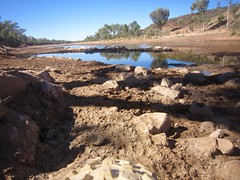 Day 4, passing waterhole between Running Water Yard and No.6 Yard 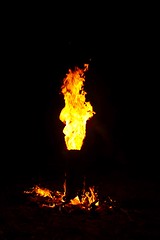 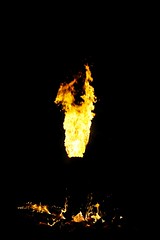 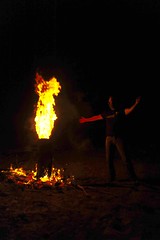